As steam hose season approaches and you inspect or replace the products that you have in place, your industrial hose supplier should be aware that tube erosion (typically called the popcorning) in steam hose is most pronounced in hoses on the market which have an inner liner of EPDM rubber. Tube erosion will destroy a steam hose and can damage the steam network. It’s also what injures dozens of workers each year when a hose product fails.

Popcorning destroys steam hose from within and the effect occurs when microscopic water particles collect in the wall of a hose. 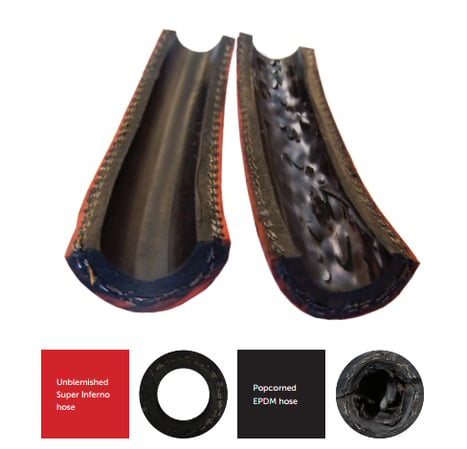 GOODALL® steam hose products use EPDM on the outside for its outstanding ozone, weather and abrasion resistance properties. For the inside, they have developed a proprietary Chlorobutyl compound that is fifteen times less permeable to vapor and other gases than EPDM. The lower the permeability, the longer the hose life, the greater the safety. Building on the superior proprietary compounds, the Inferno ISO 6134-2A steam hose product is braided with zinc-plated wire, which:

Static electricity is another inherent hazard with steam hose, a hazard too often not considered.The build-up of static charge is influenced by the insulating properties of the transfer media andits flow rate. External factors, such as humidity and temperature, can vary the generation of the static charge, creating an unpredictable amount of static.
To minimize the risk of electrostatic build up, the Inferno ISO 6134-2A steam hose is also engineered with conductive compounds where all rubber components of the hose can dissipate the electrical charges, too often a risk not considered. Designed in accordance with the international ISO standards, the Inferno ISO 6134-2A exceeds the criteria outlined in the standard.
Contact your nearest Lewis-Goetz location regarding your specific steam hose application.