Anhydrous Hydrogen Fluoride (AHF) is used as a catalyst in the reaction that combines C3 and C4 olefins and isobutane to produce alkylates, an important component of gasoline. AHF readily reacts with any available moisture to create the corrosive and toxic Hydrofluoric Acid. 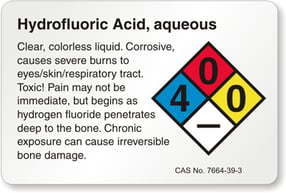 So hazardous is this material to humans that OSHA lists the Permissible Exposure Limit (PEL) to 3-ppm averaged over an 8-hour shift, while the National Institute for Occupational Safety and Health (NIOSH) lists the IDLH (Immediately Dangerous to Life or Health) concentration at 30-ppm. In and of itself, this hazard level arguably makes HF Acid Alkylation Units the single most dangerous sealing application in modern refining.

In view of this hazard, the first requirement a gasket supplier should be aware of is that a gasket for HF units must be the ability to provide a tight, positive seal to prevent the flange leakage of HF.

Anhydrous HF Acid is not corrosive to carbon steel. However as mentioned above, it readily reacts with any available moisture to create Hydrofluoric Acid which is extremely corrosive.

HF Units periodically must be cleaned, serviced and inspected. At such times water or other aqueous solutions may be used for cleaning up the piping or hydrotesting prior to returning the line to service. Any of this moisture that makes it past the inside of a flange gasket – and sits trapped between the flange and the gasket – becomes a potential source of corrosion. When the system is charged with AHF these pockets of moisture can quickly become pockets of aggressive HF Acid, resulting in flange pitting and significant corrosion, especially at the flange ID.

As a result of the prevalence of flange corrosion, flange replacement in HF Acid Alky units is common.

One of our clients reported that they replace 1/3rd of all flanges opened in plant turnarounds.

The second requirement, then, of gaskets for HF Units is that they seal against intrusion of liquids between the flange faces. They must have sufficient compression and suppleness to conform to existing imperfections in the flange faces while being able to work in an aggressive chemical environment.

A technical paper has been developed which explains the critical nature of HF acid environments and surveys the gaskets that have traditionally been used for this service. Click here to download this technical paper that offers information on the advancements in gaskets for HF Acid Alkylation.

David Clover is a Senior Product/Application Specialist for ERIKS North America. Since 1984, he has worked in the gasket and sealing industry, both in distribution and in manufacturing. His love for teaching has led to the development of sealing seminars that he has conducted both nationally and internationally. David was the principle design engineer of the ALKY-ONE gasket for hydrofluoric acid service, as well as the Marine-One gasket used by Shell for the prevention of crevice corrosion on super duplex flanges in salt-water environments. David is a voting member on the ASME B16.20 committee for standard flange gaskets.